My iPhone Home Screen on MacSparky 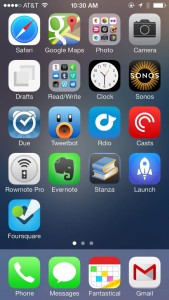 I recently was featured on serial geek David Spark’s blog showing and telling about the apps I use on my iPhone home screen.

There are worse ways to spend 10 minutes:

Here’s the text from that for future posterity:

What are some of favorite apps?

Everyday I use this sucker to write something no one will see online at one of the blogs (read: i’m a big time internet guy) I run. Also used for quick note capture and jokes I think are funny while I’m drunk but then aren’t funny when I read them the next day.

In all seriousness, though, I’ve started writing more and more in Drafts on my phone. Capturing things in bite sized lines, a kind of shorthand, has helped me put together pieces like this, this and this (warning: that last one’s a bit heavy… and I really did write it in Drafts).

This app is one of those great bits of technology that, most of the time, makes me more human. Note it’s placement for optimal left-hand thumb thumb velocity… i’m serious about Drafts, you guys.

How else am I gonna make my boring life look special?

Note: the camera is there upper right as per a tip I heard somewhere (was it Gruber?) about putting the camera app where the lens for the camera is so you don’t fire it up and miss your son’s first steps because your finger was over the lens… ya’ turkey!

Fk’n sonos, man. This + rdio has put the music I lost when I had a family back in my life. I just make a bunch of playlists in Rdio for different moods and throw one on ever dinner time… then I can’t hear the way some people chew their food with their mouths open… animals.

This is where I share all those VSCO’d pictures. It’s also where I subscribe to a bunch of great image blogs… perfect for brain dead moments after writing about how cool your phone’s home screen is.

I put this app in a folder, but I shouldn’t. I use this app frequently, and rarely use the others in the folder… though I occasionally open up the Alien Blue app to stay up to date on… erm… “human form art.”

Damn fk’n right I’m not gonna forget to pickup my kid from school… cuz I set a timer. My wife doesn’t set timers because she’s a wife and wives have a whole section of brain matter that dads don’t have. So I set timers using Due.

One oft-used timer is the 26m power nap timer. I’ll admit it, I nap.

I use it to control my media center, a vintage Mac Pro running plex and safari and a whole bunch of “content” acquired in a “perfectly reasonable” way. I’ve got a logitech remote, but running netflix is just a lot easier with this app.

Like many clowns on internet, I admire Merlin Mann too much. I always wanted to use the notational velocity… but I was hooked on evernote from an early age for one reason: audio notes. Most of my ideas start either on the toilet in Drafts or in the car in an evernote audio note.

Evernote is such a slow and cumbersome app, but i’ll {insert Allan Watts quote here} and assume it’s good to slow down a bit as I wait for search results in the app to show up.

I read for about 20m every night. Lights off, dark room, white text on black background. There’s not a single app out there that gets as dark as Stanza. Which sucks because this app is old and is never slated for another update.

I’ve tried everything else, and really wanted Readmill to work because it looks sexy, like a designer made it, but they all shine way too bright in the night, it’s a fright… me no like.

A new friend encouraged me to check Foursquare out for a few reasons (he also got me on Path, but I haven’t found a way to care about that one yet). So far I’m liking it more than yelp for recommendations and tips. I live in Portland where we pride ourselves on the ungodly amounts of baristas and service workers we can employ… so the recommendations for this pork-fat-turkey-juice sandwich or that double-decker-beer-bus-handstand place come in handy.

Rdio is great. I love discovering music this way. I usually leave this app set to “Offline” so it doesn’t mess up my computer’s “Play Later” queue. I typically only listen to my workout playlist on the phone anyways.

Casts app is fine. Everyone’s bitching about podcast apps. I switched a few times, but they’re all basically the same. I subscribe, I want to listen to all of them in reverse chronological order at 1.5 speed. They all do this. I am satisfied. And this one looks a little better than the others. Here’s to hoping Marco shows me what I didn’t know was broken about podcast apps.

Which app is your guilty pleasure?

I’ve never been a gamer besides that one time in college where the dorm room had Tony Hawk Pro Skater 3 and I felt compelled to beat the game with every player because I’m an idiot. But I’ve just learned how to play candy crush (you gotta break the jellies!) and I dislike how often I want to play it but don’t because people will judge me.

What is the app you are still missing?

Audio notes app… I fire it up, it records, then it sends the audio file over to Evernote with an attempt to put the first 1m into text in the note. There are some evernote audio apps but they’re buggy.

How many times a day do you use your iPhone/iPad?

When I walk or drive anywhere I’m listening to a podcast… could be Back to Work, Mac Power Users, Radiolab, my show (what? I listen so I can get better.), Bionic, ScriptNotes, WTF (this is the one that started it all for me)… Every now and again I text my wife too.

What is your favorite feature of the iPhone/iPad?

I like being able to take pictures quickly. Just upgraded from 4s to 5s and it’s much snappier. That and podcast. And being able to contact everyone around the world and write things when I’m pooping and making music too and that time I had it when I went to sushi with my friends and now I can remember that and then this time and this time and when I made a website for a guy and then he saw it and send me this and then we became business partners eventually and then my very favorite time. There’s a few things I like about the iPhone… but mostly that.

If you were in charge at Apple, what would you add or change?

This is hard. I’m not a smart apple tech rumor guy. They make stuff that’s so fun to play with. I make all my money using their things. I just got a new MBP retina. Every time I look at anything written on that screen I shit my pants… feels like being on drugs. So it’s hard to get up in the air and see what they’re doing wrong. I hear marco bitching a lot about developer relations stuff… i’d tell apple to fix that and be nicer to their friends. I’d say, “dude, I have about 30 firewire 800 drives… no FW on the new laptops, seriously?” I’d say that. I’d say, “I saw a collection of those Think Different posters recently and I cried… I literally cried.” And I’d say, “Tim Cooke, I like that you’re gay (you’re gay, right?) and I applaud you and how come when my Mighty Mouse gets disconnected for a second I want to slam it so goddam hard and throw it across the room and can you make that not happen more?” And then I’d say, “thx for making me feel awesome.”

I write more here and hope you have a nice day, David!