How To Make Your Audience’s Favorite Podcast Episode

[Setting: two guys in a small room. Large headphones on their head. Pint glasses in their hands with small bits of ice left at the bottom, the remains of a redish drink. One of them doesn’t have pants on. He’s wearing white underwear (“tighty whiteys”) with a napkin over his lap]

“Ah fuck. There’s no way we’ll be OK publishing that,” the one in the napkin said, blotchy red bits on his face, wayward hair strands hanging in his eyes.

“You think?” the other one said, a bit giggly and out of breath.

Do you know what a negroni is? It’s a cocktail. I’ll leave it at that for now, but ask me about it sometime — I have negroni theories, not just recipes.

I run a podcast with two friends. We get together, turn on our mics and tackle some business issue our audience has asked us about.

It’s pretty successful at this point. Heading towards 9,000 listeners per week. (8,800 last week). We have a good deal of iTunes reviews, virtually all 5 stars (141 at the time of writing). These numbers are much bigger than the average podcast and much smaller than the biggest podcast.

What I’m saying is, we have an audience. It’s growing. They like us. And I like them.

I care about our audience. Many of them are brave, trying shit, attempting to work for themselves, looking to create a thing, hustling on the side, sweating towards earning an independent, engaged, fulfilling living.

And, so, I try to make good stuff for them. I try to be smart for them. I try to “curate” and “edit” and “narrative arc” and “climax and resolution” and “intelligent yet accessible” and “takeaway” for them. And by and large that’s what you’ll get out of the episodes of my podcast.

But there are 3 notable exceptions; all three of them involve negronis. (it’s a cocktail. I have theories. Ask me sometime.)

Not only did it last, it put us on our asses. We recorded episode 16, what I wish I would have known before starting my business, with large cocktails in our hands getting progressively… how do you say?… looser.

“Ah shit,” I thought, “we’ll never get to publish that… i’m pretty sure I said something horrible in there.”

But we published it. And much to our surprise, it became the unanimous favorite of our listeners to date. They said things like this:

…you had me literally laughing out loud.

…I laughed harder at this episode than any other yet. Just as much if not more value than usual, so worth my hour.

…off to solve someones ass problem… [those are] words I’ve never written before.

I was blown away. I couldn’t believe how big the response was to this episode. Much smaller than it is for the big podcasts, but a big response for our little corner of the internet.

“Fuckin’ A, man. They really liked this stuff! I thought for sure it was going to be lame, self indulgent, people would hate it. But they ended up liking it more. Let’s try the negroni for our next one.”

So we did. Chaos ensued.

We poured our cocktails, grabbed our notes, pushed record. Within the first 15 minutes we were sidetracked. I was in control, felt good (felt great actually), and made the executive decision.

“[hand clap, queues the editor in on where edits should happen] BTW, boys, we’re totally turning this into two episodes. We’ll record them both now. Keep going on this thread, it’s good. Then we’ll weave it back into the original conversation.”

So executive. Such decision. That was about 1/4 of the way through the cocktail, the pint of negroni in my hands.

Interesting Fact: Unlike a rum+coke or a Fernet+coke or a gin+tonic or a whiskey+soda, the negroni is equal parts gin, Campari and sweet vermouth. All are boozes. It’s a 3x booze drink. This is an important fact when you are a). drinking one, b). drinking one from a pint glass, c). recording things to be published on the internet in perpetuity. End fact.

So we kept going. It went good. It got hot. I took off my pants. I stood up at one point. People were laughing. There were impressions. We actually cried at one point. This was some colorful shit, man.

And that’s where you found us at the beginning of this post: absolutely certain the two hours we just recorded were unpublishable.

So we published. (part one, part 2). The second went out last week.

I was nervous. I was worried. I was afraid people would feel like there was very little signal and way too much noise.

But I was wrong, they loved it! They loved them both, especially the second one which goes way deep into wild and inside-jokey territory. I’m flabbergasted.

Here’s what I’m learning from this whole thing:

1. People follow people. Our audience is exceedingly interested in us as people. As one of our listeners puts it, “the most valuable element for me is just hearing from people who are a way ahead on the journey.”

Merlin Mann puts it like this: “people come for the topic, stay for the voice.”

That feels true to me from where I stand, embarassingly giggling at myself wearing a napkin (and also remembering how that felt like the right thing to do at the time).

Our audience seems to be digging us. Us. Not our tips and tricks. Not our “three P’s of personality” lessons. Not our resources and insights. They continually mention how much “value” they get from the show, but they seem to be sticking around because of our personalities, how we look at this stuff, our point of view… no matter how colorful it may be.

2. People like honesty. Between the three of us on the show we have a lot of experience. But we bring out a kind of honesty in one another, a sense of “we’re still developing, figuring out what we want and how to do it.”

Because we allow each other to be developing, to be in process, because we don’t require right answers, vulnerability and honesty have a place to grow. Rawness comes out, and rawness is interesting.

Be honest. Be yourself. Give up on comparing yourself to what the competition is doing. Blaze your own trail. Etc. Etc. Enter your bit here about not being a follower.

Yes, this is trite sounding, but discovering how to be you on a mic or a stage or a blog post or a camera or a canvas is where the fuckin’ juice is; it’s the most important part of your journey. (more on that: 1, 2). 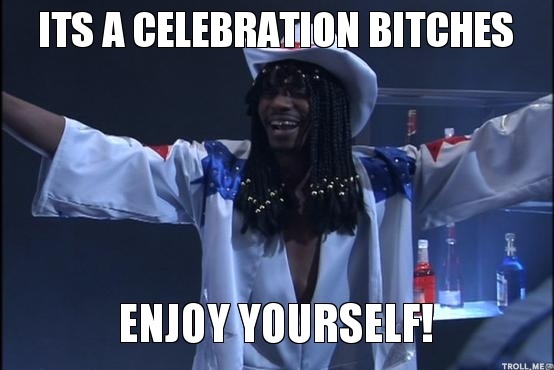 3. Enjoy yourself. When you get to be honest and vulnerable, when you gain a little confidence from an audience that’s responding well to what you’re doing, you get to have a bit more fun. And people like to watch people have fun.

Do they really? Yes. I don’t know. I think so. Maybe they like it because we’re heading somewhere they want to go too. I should change it to:

3. Have a worthwhile mission and enjoy yourself in the pursuing of it. Maybe the mission part is important. You want to provide what the people call “value.” You want to “help” them with something. Solve some problem. Close some gap. Teach some thing.

I love that in our show we are helping people close the gap between where they are now and where they want to be. I love that we get to teach from our experiences and that we’re in an industry that’s still very much developing.

But I mostly love that there’s so many people thinking about how they could build their thing and work for themselves. It’s a goddam hard thing to do. And I get to sit in my undies and talk with my friends about it and listeners write me emails to silly addresses we mention only on the show and they quote back inside jokes i’ve made in the context of them winning their first client. I love that so much, you guys.

So, listen, I’m the dumbest guy in the room, but if you get a chance to be yourself out loud, to have fun, to be vulnerable and honest, please, for the love of G-d™ rip into it and be generous and grateful and take risks and see how people respond. Life’s too short and it’s too common to regret not speaking your mind.

I have been Chase Wardman Reeves…

(You can find episodes 20 and 21 along with all other episodes of the Fizzle Show and instructions on how to subscribe at FizzleShow.com »)