Viktor Frankl – Why To Believe In Others (video)

Viktor Frankl wrote Man’s Search For Meaning, an incredible book. Simply incredible (more on the book below). Here is a video of Frankl speaking at a conference in Toronto in 1972. It’s simple and humble, but when he made his point it was a paradigm shift for me. 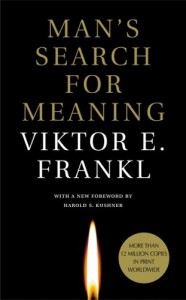 Man’s Search for Meaning by Viktor E. Frankl is among the most influential works of psychiatric literature since Freud. The book begins with a lengthy, austere, and deeply moving personal essay about Frankl’s imprisonment in Auschwitz and other concentration camps for five years, and his struggle during this time to find reasons to live. The second part of the book, called “Logotherapy in a Nutshell,”describes the psychotherapeutic method that Frankl pioneered as a result of his experiences in the concentration camps. Freud believed that sexual instincts and urges were the driving force of humanity’s life; Frankl, by contrast, believes that man’s deepest desire is to search for meaning and purpose. Frankl’s logotherapy, therefore, is much more compatible with Western religions than Freudian psychotherapy. This is a fascinating, sophisticated, and very human book. At times, Frankl’s personal and professional discourses merge into a style of tremendous power. “Our generation is realistic, for we have come to know man as he really is,”Frankl writes. “After all, man is that being who invented the gas chambers of Auschwitz; however, he is also that being who entered those gas chambers upright, with the Lord’s Prayer or the Shema Yisrael on his lips.”