How To Beat Futility

It really doesn’t matter who you are, Sarah Silverman is pretty funny.

And, although her memoir The Bedwetter started out kinda slow, it’s getting good because she’s talking about how she started developing her act, her voice. This is the part I love to learn about.

Here’s the setup: At this point in her life, Sarah was just starting out – young, eager, hopeful, chumming about with other comedians working on their acts in NY (people like Luis C.K., Ray Romano, John Stewart). One sentence jumped off the page at me:

”…but that’s the whole trick when you’re starting out as a standup comic, not to succumb to futility.”

This struck me because I’ve felt the futility that comes with starting something new. 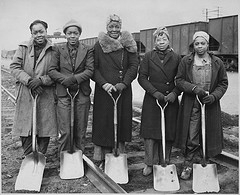 We’ve all felt that young-ness in projects… the vital tightness of stuff we may work on that almost blinds us with hope, like it could survive anything – whether it’s an idea for a business, a speaking opportunity, the prospect of a lifestyle change, new house, etc.

But often times there’s this thing that harshly cuts off that vitality, like your peppy little plan just bounced a bit too energetically and hit the f!ck out of a brick wall. All of a sudden your sails are deflated, your hope is fear, and your general attitude towards the project is: “meh…”

That’s futility. That’s what happens when your mind catches thoughts like, “ah, but it would never work,”or “what’s the point…“

”…but that’s the whole trick when you’re starting out as a standup comic, not to succumb to futility.”

Sarah is saying she would have never kept pursuing comedy if she felt this, that the hope and youth completely fueled her pursuit of comedy, that they were essential to moving forward.

Futility, and the fear it’s based on, is completely subversive because when your little dream hits something like a brick wall, your mind says, “ah, there’s reality. Yea, it was all a pipe dream, lil’ kid stuff.”

Like your mind, which told you the project was a good one in the first place, is now more qualified to say it was a bad one?

She says the whole trick is “not succumbing to futility.”How can we do this? What are some ways we can beat futility, ignore it, or defeat it, to pursue our project?

One way is to out-will futility and just get started – to throw yourself down the black diamond and try to keep your tips up!

Another way is to out-smart futility, to think the project through from every direction until you feel utterly confident.

Another way is to out-number futility and bring some friends you trust with you… because you may need to push-pull each other over the cliff.

However you do it you have to do it – If you want to pursue a project you have to beat futility, bounce off the brick, acknowledge, and move on…

Quick question, how do you do it? How did/do/will you beat futility?

I’m excited to announce that I am beating futility and launching a new project in the next few days. Thanks!

P.S. It’s launched now ==> a blog for dads called FatherApprentice. Check out the blog post about the launch here

I’ve been working on several side projects over the past year, and was finally able to get myself to the top of one of them… so’s I can throw myself off of it… at you.

There are a few loose ends to tie up first, but I wanted to mention it in this post because it feels good to dance on the grave of futility… that yella’ bellied b!tch… who “had their way”with who now!??

So, let’s have a futility burning party! All the best…